Tilottama had the  most beautiful orchard in the Srivelliput, a small village along the lagoons on the south Indian coast. She grew all sorts of vegetables, fruits, herbs in her orchard. People came to her for medicines that she made with those plants and gave them away for free. Flowers, fruits, vegetables, green leaves, wood, herbs –all were freely available to all the visitors. All they had to do was to ask. 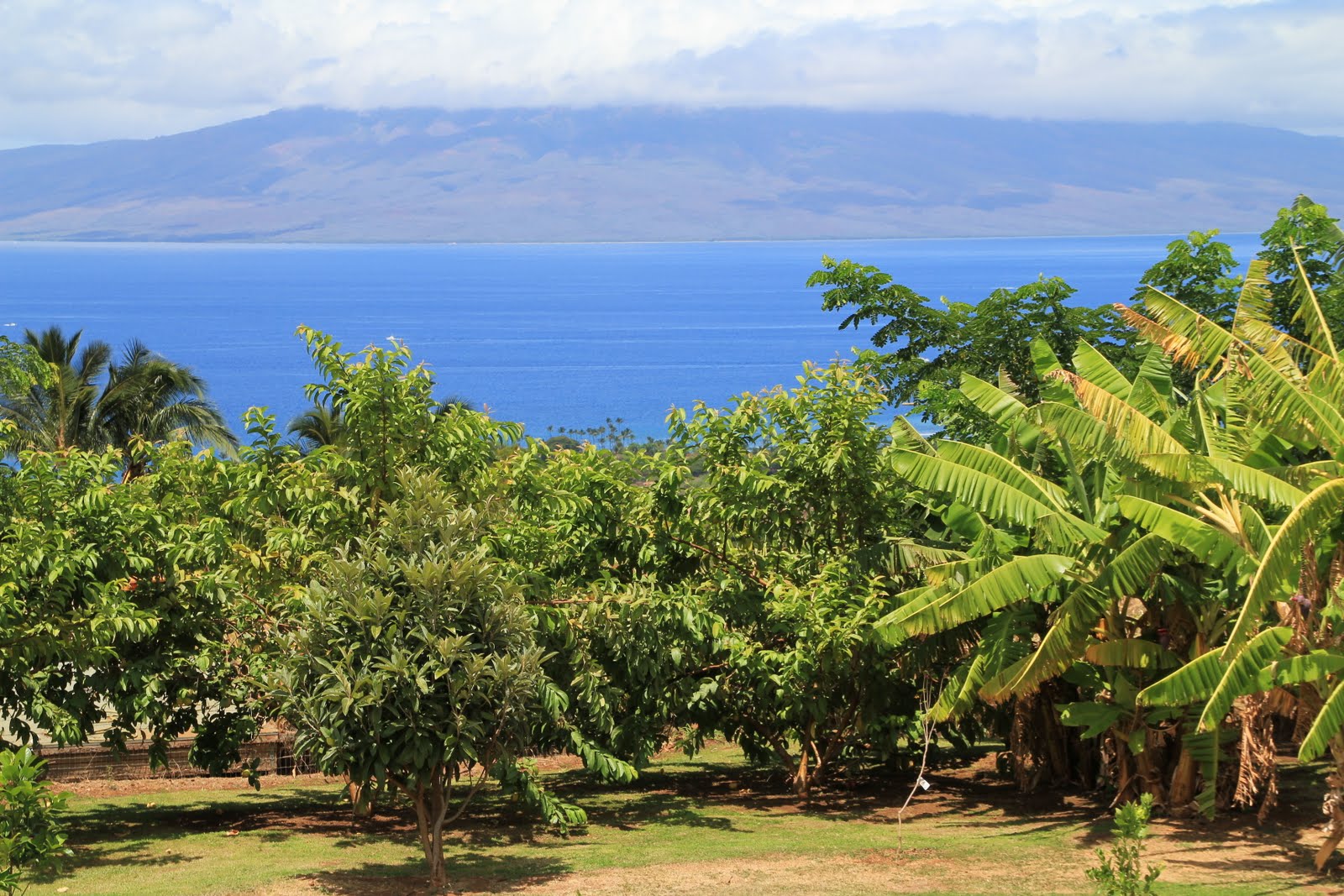 She considered her orchard to be santum sanctorium of her temple. She had no children, sibling, or relatives. Only the orchard, and a house that her husband left for her. She looked after the orchard with love and great care. She talked to plants and always took permission from them before using any parts for herself or the villagers. Taking permission from Tilottama before taking anything from the orchard was an unwritten rule. For Tilottama those plants and herbs and even a tiny blade of grass represented god in living form. 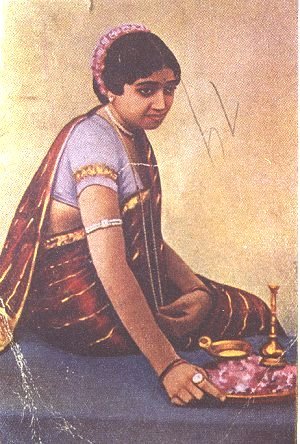 One day a local tradesman was passing by. His elephant was thirsty. He knew Tilottama wouldn’t mind if elephants drank from her pond. The elephant quenched his thirst and moved on to ravage the cluster of ripe bananas hanging in the thicket next to the pond. Before the tradesman could stop the elephant, he had destroyed the cluster and started devouring the bananas. Tilottama was in her prayer room. At once she understood something was wrong. She rushed out to see the elephant happily munching the bananas and an uneasy tradesman sitting on the elephant’s back with an apologetic grin. Tilottama’s anger grew thousand fold when she saw how savagely the banana trees were ambushed by the elephant. Ignoring the subtle rule of asking the plants and causing the minimum harm while removing the fruits, instead, these two not only blatantly broke the rule of the nature but also the sanctity of the holy orchard. 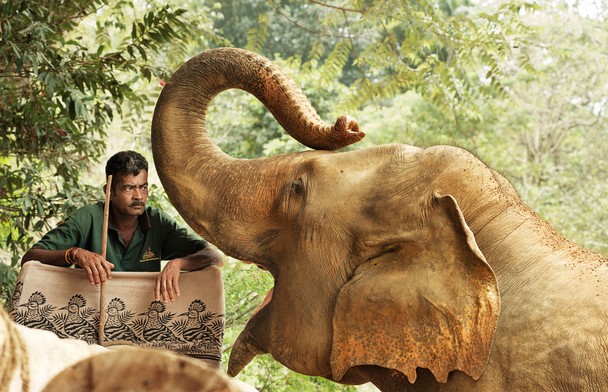 Anger diminished her reasoning and compassion. She cursed the tradesman and the elephant to get sick and die for their heinous acts. Tradesman begged and pleaded but Tilottama was beyond reproach. That very night elephant had severe pain due to indigestion and collapsed by the next morning. The tradesman in attempt to help the elephant cracked and broke his back. Now there was nothing that could be done to reverse the damage. An innocent animal had died and the man turned into an invalid because of her curse. No amount of wishing to undo her curse and to change the outcome would work. She lamented her self for days but she found no respite from her overbearing guilt. Finally, she went to tradesman’s place and brought the invalid in her own house to look after him. 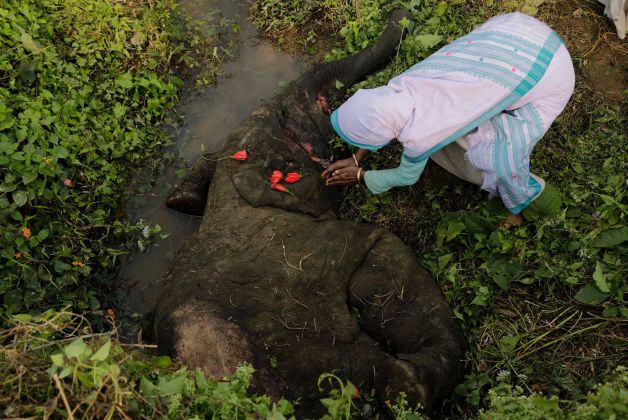 The tradesman did not protest because he had no one to look after him. But he never spoke to her; she fed, washed, bathed and kept him clean. She took every bit of care. But tradesman only saw guilt behind her acts. He talked to her in a rude manner and nods. He looked at her with anger and contempt. Tilottama felt she deserved his wrath; she quietly looked after him and silently begged him to forgive her.

One day tradesman got really sick and was breathing his last breath. Tilottama rushed in; it had been 20 years since the incident. She genuinely cared for him. She went close to hold his hand but he snatched it away and told her, ‘you are not forgiven; you are the cause of my suffering.’ And he passed away. Tilottama felt sad but she knew she made a grave mistake but her repentance was sincere. She calmly went on with her life. In subsequent lifetimes, Tilottama’s being endured pain and hardship as repentance for killing an innocent animal. But Tilottama and tradesman met again many centuries later in different lifetimes as relatives.

The tradesman’s being was still constantly angry at her and he still treated her wrathfully. He felt the urge to hurt her for no apparent reason. On the other hand, Tilottama carried no guilt on her being because of her sincere repentance. She silently endured tradesman’s misgivings and finally distanced herself and moved on to new experiences. Tradesman in several subsequent lives suffered from the poison that brewed from the hatred and anger stored in the core of his being.

Ratnawali was a beautiful courtesan who danced like the waves of the ocean. There was such fluidity in her moves that the people who watched her remained mesmerized by her. Her talent coupled by her tremendous beauty, she became an object of great beauty, desire and envy for the princes' from the surrounding kingdoms. Raja Agrasen however felt great pride in having a gem like her in his court. One day right before her performance in the court, a haggard looking old man with blisters and boils all over his body, dirty skin and matted hair stepped in to the royal court. His body emitted a foul smell and flies circled around him. Raja was a wise old man who immediately recognized his kulguru, Hari Singh. He met him with great reverence and welcomed him warmly without disclosing his identity. He sat right next to the king. 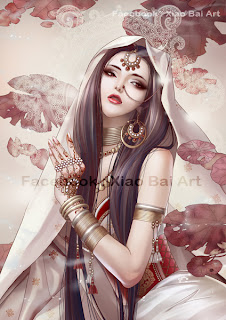 As the performance began, Ratnawali noticed guru Hari Singh. A wave of aversion and disgust ran over her watching the filthy man sitting next to the king. Soon she was overcome by repulsion and disgust. She felt distracted by the thought that 'how such an ugly filthy man is allowed to watch someone as beautiful as her dance'. During the course of the performance, something dramatic happened. 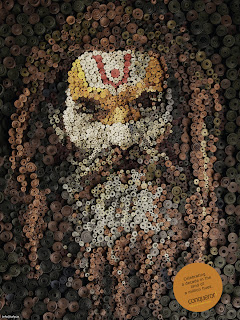 Ratnawali started developing wrinkly dark skin with boils and pimples all over her body. Her perfect ivory teeth became yellow and jagged. Her smooth silky hair turned matted. The onlookers were horrified and stunned to see something opposite happening to the begger sitting next to the King. 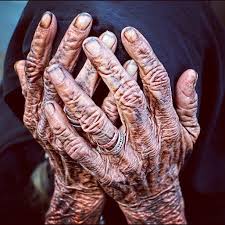 His skin became clearer,  clean radiant golden color, with flowing white beard and hair. He looked every part the mahaguru Hari Singh. Ratnawali could not bear the foul stench emanating from her body. She collapsed on the floor as she realized what had happened to her. She cried and begged the guru to forgive her behavior and reverse the transformation. 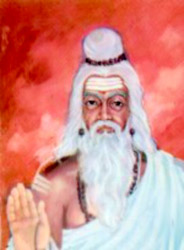 The guru Hari Singh calmly said to her, ‘ you will have to earn your beauty back, Ratnawali. Any good deed that you do will cure you inch by inch at a time. That’s the only way it is possible for you to regain your beauty.’ Ratnawali rushed out crying…men who looked at her with immense desire, turned their faces away in aversion. She started her repentance by giving food and money to the poor and every day she saw her body heal inch by inch. She wanted faster results so she started feeding the incapacitated with her own hands. She carried the invalids around, dressing the wounds of the leppers, giving medicines to the sick and bandaging the wounds of the injured. She was driven so passionately by her goal that she did not realize her skin, hair and body had almost cleared up. She was regaining her beauty. 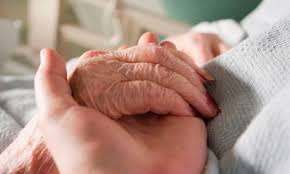 A year passed. She devoted her self day and night to serving the poor and needy. Not only her beauty  returned back but she also started to develop a beautiful radiance about her. By this time, she derived such contentment and inner peace with what she was doing- something she never felt when she received the accolades when she was a royal dancer.  Her being was bursting with joy and bliss; she no longer worked for the purpose of regaining her beauty. She did it for the bliss it brought her. 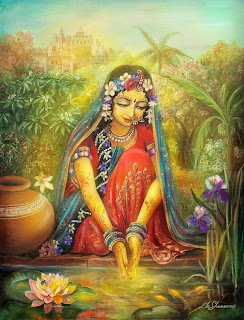 One day, unexpectedly guru Hari Singh showed up at her door. One look and he understood. He blessed her and said, ‘Ratnawali, you have earned both inner and outer beauty again. Now you deserve to get beyond both.’ Saying that he touched her forehead and transported her to the world of Supreme Bliss.

Anukriti was a daughter of a noble man. She was talented, smart, and absolutely child-like. Her purity was such that whenever she laughed bright dust of precious gold danced and rained around her face and fell on the ground. People loved her child like laughter. It took away their worries and pain. The servants made her laugh more often to gather the gold dust from around her. 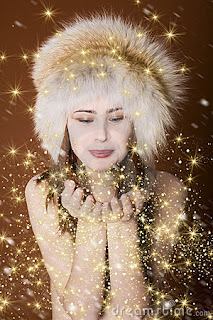 When she grew up, a young man saw her laugh with child-like mirth. He instantly fell in love with her. Her father saw that this was a good match and agreed to the young man’s marriage proposal. 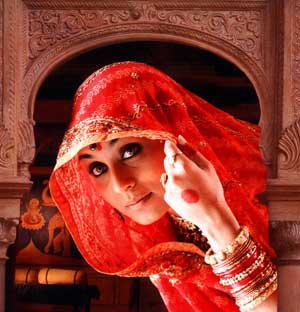 Anukriti and Shailesh were soon married but the moment she set foot in her husband’s small province, she saw desert, drought and hunger-deaths all around. It depressed her to learn that the draught had persisted for nearly a decade. Her depression grew deeper every day. Witnessing more poverty and sadness filled her eyes with tears. Her tears created thorns and cacti and shrubs wherever they fell. 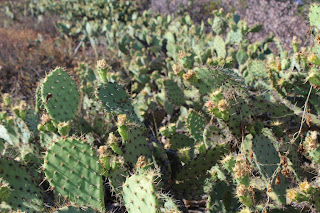 Shailash grew concerned about it when he noticed that the regal gardens were slowly turning into thorny shrubs. He sought the help of his family guru who lived by the stony mountains. When he narrated his story, the guru gave him a red thread and sword to be placed under her pillow. Next morning, the depressed wife who by now had lost all her vigor, started shedding tears of sadness. But this time instead of thorny plants, streams of water started to flow wherever her tears fell. 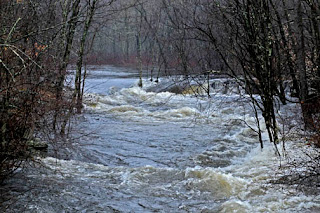 At first he was sad to see her cry, but Shailash also found relief because the incessant flow of water started helping the people in his province. He tried to pacify her by showing her all the greenery around. But by then, Anukriti was beyond solace. One night, she cried incessantly. The rivulets swelled into streams, streams into rising rivers. Shailesh ran to his guru and asked for his help. Guru gave him a sad look and said, “when you saw her laughing in pure mirth, you coveted her beauty. When you saw the thorns, you wanted a remedy. And now when your province in the peril of being drowned in your wife’s tears, you came back to me for help. When was it that you ever genuinely cared about her? This problem would only be fixed when you will shed tears for your wife or you are doomed to drown.”

Shailash came home to find his wife’s beautiful face covered with shadows of darkness and pain. His heart twisted in pain and remorse. He felt responsible for her plight. He tried cheering her and trying to make her laugh. When all attempts failed, he looked up to the sky and prayed on his wife’s beautiful face again. Sad tears of repentance rolled out of his eyes. He forgot all about it till a few days later he found Anukriti in the garden smiling faintly looking at a pair of parrots. 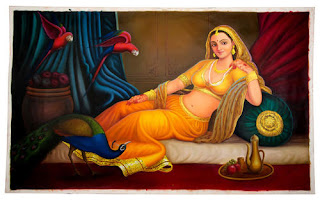 Fragrant flower petals danced around her face as she smiled; soon spring came. One day watching their little one play, she laughed playfully. Strands of silver danced around her and fell on the ground. One day just like that, the house of Shailesh was filled with her child-like laughter again and servants chasing her to collect to all the gold from the ground.