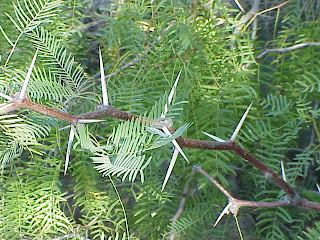 Diego was a handsome young man with perfect muscular body, bronzed skin and chiseled features everything was perfect except for one thing. He had thorns on his head instead of hair.It made him look something of a monster. Since his childhood people made fun of him because of thorns on his head.They harassed him and made him cry. This made him bitter and angry from inside.He was angry with the world.
It made him very unhappy, doctors or healers had no answers or solutions for him.
He was growing more and more unhappy by the day. Finally he decided to pay a visit to the wise old man who lived by the countryside. Everybody said he would know the solution to his weird problem.
The old man after hearing his problem said "There is only one solution to your problem, every time you feel angry about thorns on your head,think about flowers", saying this he left the building.Diego stared at the door and pondered over the unimaginable solution offered to him. He thought the old man is making fun of him like others.

Desperate times ask for desperate measures, so he decided to pay heed to the old man's advice.Soon it became his habit every time he had angry thoughts about the thorns on his head he replaced them with replaced them with thoughts of  roses, lavender, daisies, any kind of flower he could think of. One morning he looked into the mirror and found a few rose buds appearing on his head, puzzled, he cut them off. Morning after, his head was covered with roses instead of thorns.
He wore a hat to cover the bouquet of flowers that grew on his head and ran to the old man. Diego yelled " I followed your advice thinking it will make my thorns disappear, but look what do I have growing on my head  now ", saying this he took off his hat.
The old man replied " So it worked ! look all the thorns have disappeared from your head."
Then he added, " I know you are feeling frustrated and helpless, but I must tell you everything has a cause and effect, your mother was very angry when you were in her womb, because your father had abandoned her, she passed on those angry thoughts to your brain, which appeared as thorns on your head when you were born.When other children teased you it made you angry, and those thorns kept on growing. By the time you were a grown man you had big thorns growing on your head.Now you are recirculating that anger every time you look at your hair or feel frustrated about it. Your unhappy and angry thoughts propel them to grow.It is a chain of negative emotions, a cycle of cause and effect, more angry you got more they grew. More they grew, angrier you became. So now seeing these flowers I know you have broken the cycle of cause and effect and a new chain a new possibility a new vortex has opened. Which has a positive affirmation to it, give it sometime and see the change."
Diego did not understand much but he left feeling lighter and less discontent. On his way he noticed women were looking at him  differently.The flowers on his head were accentuating his features giving him the appearance of an angel.With thorns the same face that reflected monstrosity now flowers are giving the vibe of an angelic being to him. 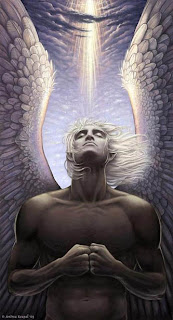 A few weeks later he found a nice friendly girl, she accepted him completely and a rapid transition came over him.He was no longer unhappy or an angry person. He felt joyous when he woke up in the morning and went to bed with gratitude in his heart.
On his wedding day his bride noticed what a  handsome man Diego is, with his lustrous dark hair and chiseled features he truly looked like a Greek god.