Sumangali went to her husband Parshavnanth's prayer room after taking care of evening chores. He had evolved a new technique of meditation that required him to stand bare foot without rest for days.
After the first day he refused to be fed. A week later he stopped having water his body grew thinner. His skin developed wrinkles, after the 13th day his legs were swollen like pillars. After the 17th day his veins on became visible, it looked as if they would rupture with the pressure of blood vessels. All the blood drained from his brain first and then from his chest arms and finally all of it reached his feet. All his energy gravitated to his feet by the 21st day. Finally on the 27th day a miracle happened a bright silver ball of light started forming around his feet, it made contact with the core of the earth and a reverse movement of energy surged up from the ground to his legs, slowly rising up, finally surging out of his head like a fountain of light. Bliss flowed through his veins. He exploded with the divine light. 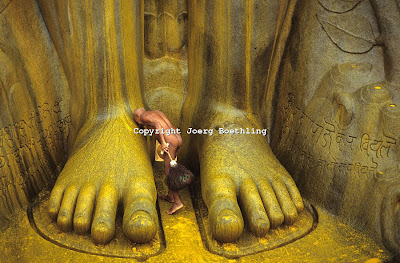 The fragrance of the divine is difficult to hide, people started following him, he taught the technique to others on the path. They felt the same bliss; soon a delegation of his followers went everywhere and helped other seekers on the path, under his guidance.
One day they ended up in the kingdom of Bharata, who was known for his fine skills as an administrator .He was a good ruler and his subject adulated him.
Parshavnath and his followers went and offered their service to all the seekers in his kingdom. Knowing the might of Parshavanath’s spiritual capacity, he became a little concerned. He knew if Parshavanath demonstrated this easy technique to fulfillment, his subject might undermine his powers. However, being a good king he welcomed their offer and asked them to demonstrate it before the common court the following day. He then went and consulted his Prime Minister who was a shrewd politician, he advised the king to hide a layer of wood between the earth and marble slabs on the floor and ask Parshavnath and his yogis to demonstrate their technique there.
Next day he and his yogis could not make a contact with the earth, because the layer of wood constantly broke the circuit of energy. In two days his yogis collapsed on the floor due to exhaustion and draining of their energy.
Parshavanath being an evolved being understood what king has done, he apologised for his imperfect technique and gracefully exited.
His disciples were furious at the king’s deceit that made common seekers loose faith in a genuine
method.
Parshavnath calmly explained, " Just as it is our duty to serve others and teach other seekers on the path, the king was only doing his duty to preserve the established order of control and subservience, you need not bother about that. A true seeker will come looking for knowledge just as a moth is attracted to a flame, we need not go and threaten the fearful and insecure and make those looking for guidance doubtful of a genuine technique". 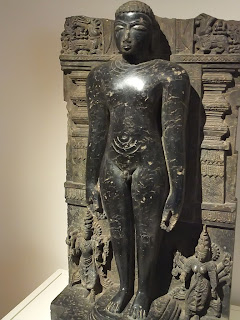 He then sat in samadhi at that very spot, his villagers formed an ashram around that place, people slowly trickled in and the word kept spreading. When Parshavnath left his body, a shrine was erected at that very place; He left enough vibrations and information about his technique in the region to benefit true seekers for several thousand years to follow.
Posted by keral at 5:25 AM